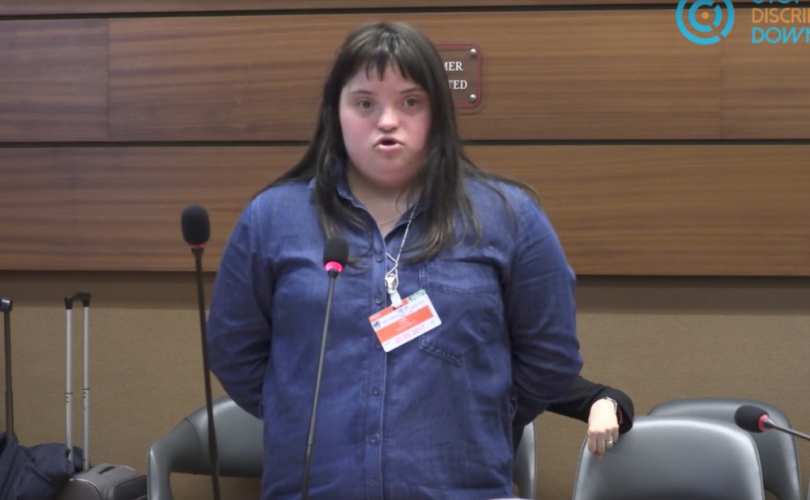 GENEVA, Switzerland, May 29, 2017 (LifeSiteNews) – A 21-year-old woman with Down syndrome gave an impassioned plea to the United Nations in March against the targeted killing of babies with her condition. Charlotte “Charlie” Fien likened the growing genocide of Down’s babies to the Nazi euthanasia programs of the 1930s. “I am not suffering,” Fien told the UN body in Geneva. “I am not ill. None of my friends who have Down’s syndrome are suffering either. We live happy lives.” “We just have an extra chromosome,” she added. “We are still human beings. We are not monsters. Don’t be afraid of us. … Please don’t try to kill us all off.” The United Nations delegates responded by giving her a standing ovation.

Fien’s journey to the United Nations began when she watched the 2016 BBC documentary called “A World Without Down’s Syndrome?” She was so disturbed that she wrote a speech against pre-screening and sent it to Britain’s House of Lords. The speech was forwarded to the Human Rights Committee at the United Nations, and Fien was invited to speak in Geneva on the eve of World Down Syndrome Day 2017.

The BBC documentary explored the science and ethics behind a new “non-invasive prenatal screening test” (NIPT) that can detect up to 98.6 percent of unborn babies with trisomy-21. Earlier tests diagnosed Down syndrome with only 80 percent accuracy. To get a clearer picture, pregnant women had to risk amniocentesis, which carried a slight risk of miscarriage. NIPT, which merely involves a blood test, became available in 2011. The test can be carried out when women are only ten weeks pregnant. Since 2012, 100 percent of Icelandic babies found to have Down syndrome have been aborted. Since 2014, 98 percent of Danish women carrying babies diagnosed with Down syndrome have chosen abortion.  In Fien’s native Britain, the figure is 90 percent.

Doctor Jérôme Lejeune (1926–1994) discovered the chromosomal cause of Down syndrome in 1959. He hoped this would erase the stigma surrounding the condition, for at the time people believed it was caused by maternal syphilis. To Lejeune’s horror, his research was used not to help Down syndrome people, but to kill them in utero. He called the world’s discomfort with Down syndrome people “chromosomal racism.” Lejeune was a strong Catholic and opponent of abortion, serving as founding president of the Pontifical Academy for Life. His cause for canonization in the Catholic Church is underway, with the Church designating him a “servant of God.”