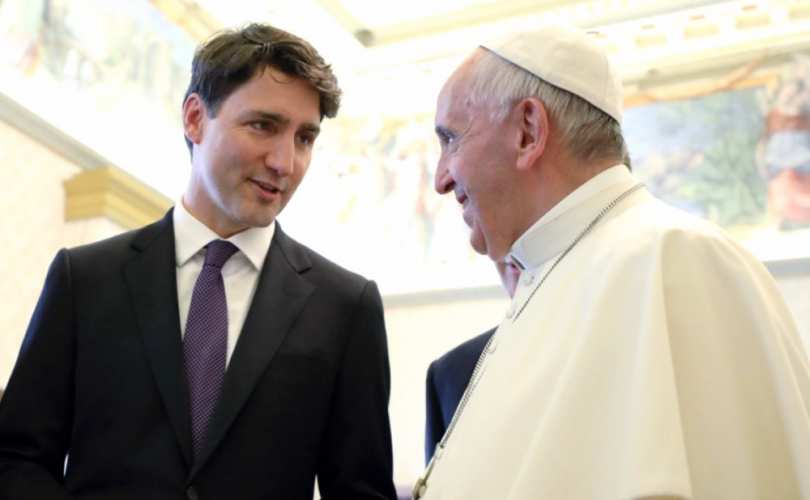 May 30, 2017 (LifeSiteNews) — Oh, the colossal irony of having Canada’s pro-abortion Prime Minister, who says he is Catholic, asking Pope Francis to apologize for abuses in residential schools caused by Catholics. Yes, the whole idea of taking children from indigenous families to assimilate them into mainstream society is wrong. It overrides the parents’ God-given right over their children. And yes, there were horrible abuses of all kinds that many of the children were subjected to. Sick and wrong.  But for Canada’s Liberal leader Justin Trudeau to demand an apology from the Pope is the greatest hypocrisy imaginable.

You see, Trudeau himself is guilty of perpetrating the worst crimes against innocent helpless children.  He relentlessly pushes his conviction that children can be violently taken from their mothers to be exterminated by abortion. But the whole idea of a woman’s “right” to exterminate her living preborn child is wrong. It totally strips a person’s right to life and to have a chance to contribute her gifts and talents to the world.  Yes, there are all kinds of horrible abuses that are inflicted on children in abortion clinics across Canada. Some of these children are decapitated. Some have their arms and legs ripped off of them. Some are poisoned and burned by a saline solution. Some are destroyed by a high-powered vacuum. All are killed in the most barbaric of ways. Abortions are never safe for the child.

Everything about abortion is terribly sick and wrong.  And there is no one pushing it more than Trudeau, the most pro-abortion Prime Minister Canada has ever had.  Trudeau has made abortion the defining issue of his leadership. He has refused to allow pro-lifers to be part of the Liberal Party. He has expanded abortion in Canada by bringing it to the former “life sanctuary” of Prince Edward Island. And he has expanded abortion abroad with his pledge of $650,000,000.