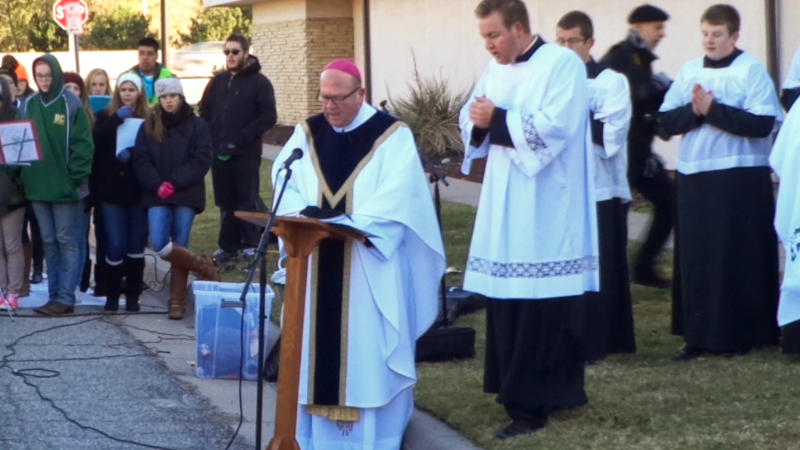 WICHITA, Kan. (ChurchMilitant.com) – A bishop is standing up for unborn children by having Mass, Eucharistic adoration and an exorcism at an abortion mill in Kansas. Bishop Carl Kemme, the head of the diocese of Wichita, along with seven of his priests and nearly 500 faithful, prayed for the end of abortion outside the South Wind Women’s Center — the abortion mill where infamous abortionist George Tiller conducted late-term abortions before he was killed by Scott Roeder in 2009.

Kemme offered the Mass for the repose of the soul Kansas Catholic pro-life warrior David Gittrich, who died on October 17 after almost four decades of defending the rights of unborn children.

Mass started at 9:00 a.m. where Kemme described in his homily a “widespread societal darkness and death.”

Here, in places such as this [abortion mill], all over the country and sadly all over the world the prince of darkness and death is honored.

Here, the devil rejoices and the darkness is made darker and death is made more horrific by the choice in this place and others like it to destroy a life made in the image and likeness of God.

It is for this reason that we come here today … to offer the most perfect prayer of the Church — the Holy Sacrifice of the Mass — offered even here in such a dark and death-dealing place.

Mass was followed by a Eucharistic procession around the abortion mill while the faithful prayed the chaplet of Divine Mercy.

On December 3, Kemme is scheduled to have Mass in Latin at Immaculate Conception Cathedral for the first Sunday of Advent. He comments, “I have wanted to offer the Ordinary Form of the Mass in Latin for some time so as to preserve the Church’s rich liturgical heritage.” He continues, “The Cathedral choir will be of great help in supporting us in singing the time- honored chants. The Second Vatican Council envisioned a liturgy that would be available in the vernacular, but it also encouraged the preservation of Latin. I hope many will be inspired by this liturgical experience.”

In 2016, Kemme led a group of people from his diocese to protest the black mass held by Satanists in Oklahoma City. He also publicly led a Rosary of reparation with the group Tradition, Family, Property (TFP) at the event.