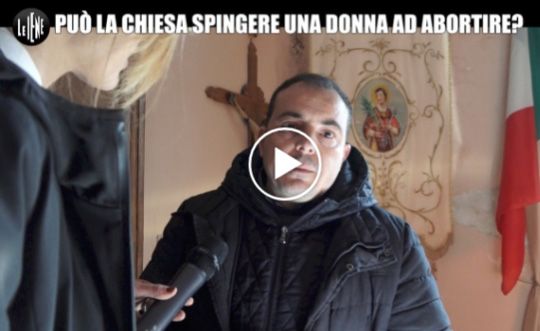 Last week, a new scandal materialized in the Italian church. A woman in Southern Italy known as Francesca, has claimed that now-retired Archbishop Salvatore Nunnari (while still ordinary of the Archdiocese of Cosenza-Bisignano) encouraged her to have an abortion after being impregnated by her local parish priest during the course of an illicit, although consensual relationship.

Although this allegedly took place several years ago in the small Calabrian town of San Vincenzo la Costa (where the population numbers roughly 2000) the sad story was broadcast on the popular Italia 1 channel throughout Italy on February 14, 2018 on the often-investigative and well-followed show “Le Iene”. The priest resigned as pastor of the parish of San Vincenzo after Iene reporter Valeria Castellano and camerawoman Giulia Mascaro interviewed him on January 16, themselves physically assaulted by the priest’s family members while leaving the parish.

Archbishop Nunnari who admitted during the interview that the relationship took place and acknowledged the abortion, has since announced that he never proposed abortion as an option to Francesca, and that he intends to sue the Iene for defamation. Nunnari has also published an open letter to his former Archdiocese.

The sad episode being aired on the Iene may have had some benefit. Virginia Coda Nunziante, president of Italy’s March for Life explains…]

This Time, the “Iene’s’’ Priest Hunt Threw Light on the Horror of Abortion

The boundaries of ethics – An unmasked Priest impregnated a woman, then convinced her not to keep the baby. But the terrible episode reveals the sacredness of life.

This year the sad anniversary of Law 194, which introduced abortion in Italy on May 22, 1978 takes place. It is a sad occurrence, because the data provided by the Ministry of Health tell us that almost 6 million children have been killed, due to this law. A law which should fill every Italian citizen with indignation but which, instead, as with many other laws against life and family, has entered into the customs of our country. Now, it’s no longer a problem, because in the collective imagination, that miniscule which is being formed and develops in the mother’s womb, is nothing else in the best of hypotheses, than a bunch of cells. And as a bunch of cells, it can and must be eliminated without scruples, if it causes even the slightest disturbance.

This is what we’ve heard repeated for years, by a completely laicist culture which pontificates in the newspapers, on television, on social media. But last Wednesday, February 14, something changed: the journalists of the Iene program despite their laicism, performed a great service to the cause of life and brought the dramatic reality of abortion to light.

This is the story. A Calabrian girl, Francesca, had a relationship with her parish priest and discovered she was pregnant. The parish priest and the bishop of Cosenza, according to the girl’s story, pushed her to have an abortion. The woman is still unable to forgive herself for it. The video is available on Youtube, and so everyone can watch it, to give themselves an idea of the facts. I don’t wish to dwell on the behavior of the parish priest and bishop: the video is merciless in their regard.

But now we come to that which has emerged from the Iene program. The girl named Francesca who told her story of pain, of being abandoned, tells of her having “realized that I was expecting a child.” The journalist then pressed her: is it true that “you wanted to keep the baby,” while “he didn’t want the child?” A surprising affirmation for this kind of journalistic atmosphere: as soon as conception had taken place, the woman “expected a baby” who was also “a child.” But then, if the result of conception is a baby, a child, how is it possible to speak of a bunch of cells, of the product of conception? How is it possible to allow a law which eliminates a baby, which kills a child?

But let’s move forward with Francesca’s story. The day of the abortion, she stated while crying, “was terrifying, I felt dirty. It was hell, my world changed from there. My life changed. I didn’t want this.” We find ourselves before a broken life, destroyed, but by what? Not by the sinful rapport with a priest, but by the abortion which they convinced her to have that January 22nd, which will remain fixed in her memory. “There isn’t a day that I don’t think about it. It was an event that has devastated me. I’ve fallen into the most horrible turmoil.”

The Iene episode confirmed what we knew, but which no one has dared to say: abortion is devastating for a woman, a wound which will never heal, which she will carry inside of her for the rest of her life; it’s the murder of an innocent being, of a creature already present, in essence, with all of its particularities and uniqueness. And, in fact, to the journalist’s question: “Do you think that with a [new] child, this pain with soften, or will you always have one child less?,” Francesca’s answer was blunt: “It’s impossible to have the lost child again.” So that little creature, easily eliminated thanks to Law 194, was her child, a child she will never be able to have again.

The Iene with this episode, has done a service to the Truth, which always asserts itself even when others want to negate it. Perhaps they didn’t realize that they had ripped the veil of hypocrisy which has always covered abortion. We cannot not take advantage of this opportunity for insisting on the necessity of totally abrogating a law which kills a human being who cannot defend himself. And we’re not dealing with – as some say – applying Law 194 better, to allow a woman to choose with [full] knowledge: there are no possible alternatives, because where there is no[t] life there is death, and the killing of a child, can’t be left as a choice.

So, it’s important to continue to reaffirm the truth on this question. The Iene has given us a great “assist” as is said today. We have to know how to grab this, and raise our voice. In May, it will be 40 years since Law 194: what better occasion to let it be seen and heard that in Italy, there is still a people which reacts, a people that loves life and the family, a people which doesn’t bend to liberticidal laws imposed on us, a people which on May 19 will fill the streets of Rome, participating in the March for Life to repeat its “no” to the laws on abortion and euthanasia.

This article was originally published in Italian, in La Verità on February 17, 2018. It was republished on the websites of the Italian March for Life and Corrispondenza Romana. It was translated by Brendan Young for Catholic Family News.