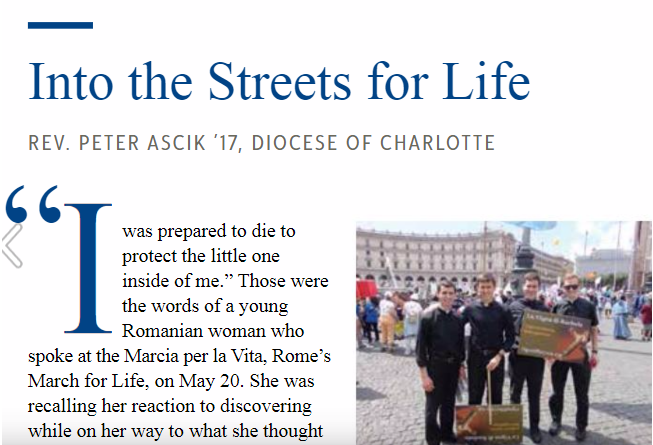 “I was prepared to die to protect the little one inside of me.” Those were the words of a young Romanian woman who spoke at the Marcia per la Vita, Rome’s March for Life, on May 20. She was recalling her reaction to discovering while on her way to what she thought was a normal pregnancy checkup that her husband had instead set up an appointment for an abortion. This woman had been pressured into having an abortion by the same man three years before, an experience she described as being like “a poison inside of her.” But this time she refused and convinced the dottor to give her an ultrasound instead. At the March she recounted her wonder at hearing her daughter’s heartbeat for the first time.

The Marcia per la Vita came to Rome seven years ago. It is part of the international March for Life movement, inspired by and modeled on the venerable Washington, D.C. March which has taken place every January since the infamous Roe v. Wade decision. From Brisbane to Brussels, from Kenya to Croatia, thousands of people now take to the streets every year to push for pro-life laws in their own countries and to give joyful witness to the fact that every life matters.

Particularly powerful at this year’s March were the speakers. One Italian woman recounted that she was conceived when her mother was raped at the age of twelve, but that her mother chose life. This woman now lives and works with the Pope John XXIII Community, which offers the chance to the marginalized and those in desperate situations to “leave everything behind and start again.” Another speaker was a Belgian philosophy professor who was fired from his teaching position for openly discussing abortion and same-sex marriage. His message was that we need not be afraid to speak the truth because in the end, we will not be judged by our colleagues, or the media, or society, but by God.

Finally, the pro-life speaker Gianna Jessen, who was born alive during the late-term abortion meant to take her life, gave powerful testimony that Jesus alone is Lord over life and death.
During my time in Rome, I have attended the Marcia per la Vita three times. As a pro-life American, it is encouraging to know that we are part of an international movement. As a seminarian, it is very important to me to witness two messages. One is the dignity of unborn children, whom Pope Francis in Evangelii Gaudium called “the most defenseless and innocent among us” and urged the Church to care for “with particular love and concern.” The other is the message that there is unlimited forgiveness and healing for those who have been involved in abortion. Here it is crucial to recall Pope St. John Paul II’s words: “The Father of mercies is ready to give you his forgiveness and his peace in the Sacrament of Reconciliation. To the same Father and to his mercy you can with sure hope entrust your child.”

At the end of her talk, the daughter of the Romanian woman who spoke came out on the stage and ran into her mother’s arms. Now nine years old, this daughter was the child she had fought for at that fateful doctor’s appointment. It was a powerful moment, and a beautiful testament to the truth of Pope St. John Paul II’s words to women who have had an abortion that with repentance and healing, “you can be among the most eloquent defenders of everyone’s right to life.”